Surround monitoring with your favorite headphones

Our software-based virtual sound card lets you monitor stereo audio files and up to 7.1 surround sound using binaural loudspeaker systems with regular headphones over the computer.

You can easily check channel allocation in the SSC by downloading the channel check files and playing them back through a media player like VLC.

The Spatial Sound Card Pro (SSC Pro) works as the standard audio device on a computer and will receive audio files automatically. It offers more than 70 binaural room virtualizations from a constantly growing number of high-end studios and dub stages like ARRI Stage One, MSM Munich and many others. The technology featured in the SSC Pro has been used for major Blu-ray releases such as The Expendables I-III, The Fifth Element, and Kraftwerk 3D.

To optimize virtualization, the SSC Pro offers sensitive parameters for individualization. This includes the ability to customize the frequency curve of whatever headphones are used. Presets for a lot of well-known headphone models are also included.

The SSC Pro doesn’t do “upmixing” or fake-surround processing; instead, it provides a natural and emotionally stimulating listening experience in stereo or surround sound with very precise positional audio reproduction.

The SSC Pro works with all computer applications that support up to 7.1 audio output, including media players like VLC and FLAC as well as video/audio workstations, games, and 360/VR applications.

The SSC Pro is recommended for use by media professionals working in the audio, music, 360/VR, video, gaming, and/or multimedia sectors as well as any other fields that need workstations equipped with high-quality audio monitoring capabilities.

The SSC Pro is a piece of easy-to-install software that will automatically work as the default audio device on both Mac and Windows computers.

Computer applications will feed into the SSC Pro instantly and with up to 7.1 surround sound, if possible.

The SSC Pro’s binaural processing systems are based on real measured loudspeaker systems to allow for realistic monitoring capabilities and mixes that also sound perfect over real loudspeakers.

Besides channel calibration and monitoring, the SSC Pro features an output limiter to control dynamics and prevent overloads. 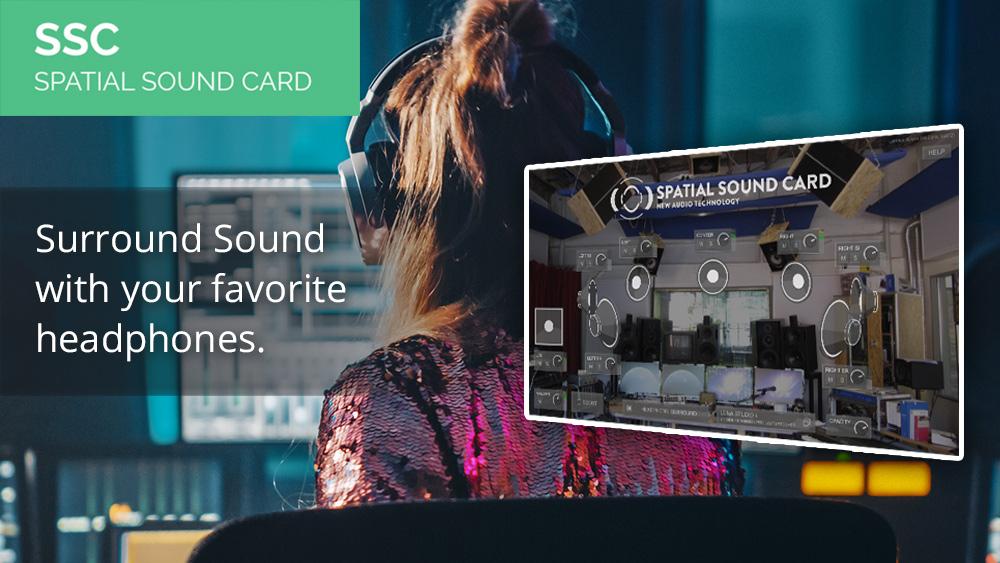 A demo of the capabilities of the Spatial Sound Card for Game Play. 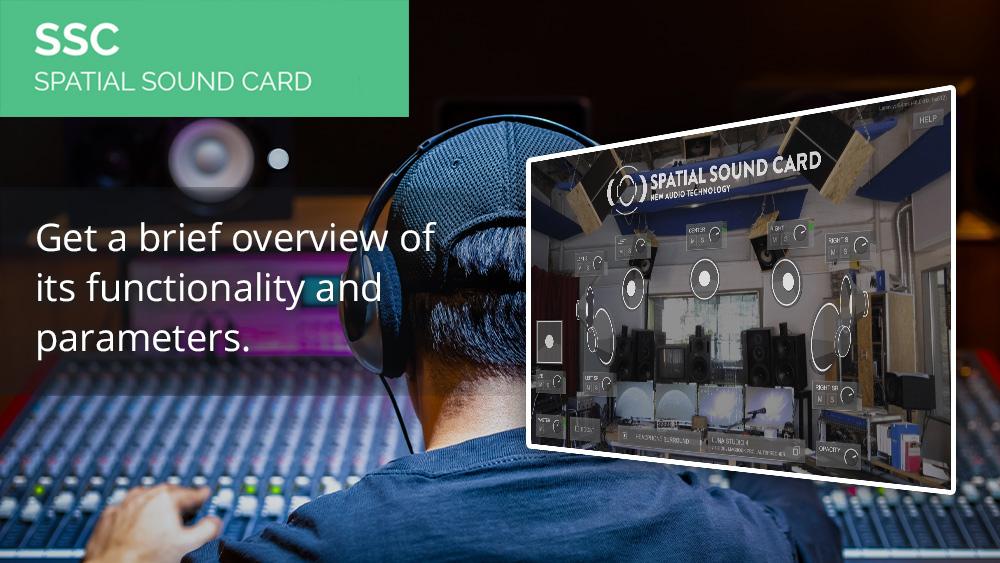 An introduction to the Spatial Sound Card.

The SSC can be set easily to the format the user wants. The playback stays in its format so a stereo input keeps being stereo, also if the SSC is set to 5.1.

Different from 5.1, 7.1 is often delivered in different channel allocations that the user can compensate by a flexible routing and preset creation.

The user can control and calibrate the virtual loudspeaker monitoring discreetly to check the content of every channel input and output instantly.

“The SAD is one of the most versatile tools I’ve ever used for spatial productions in any format, and its binaural functions create really stunning emulations of 3D speaker setups in different rooms.”

“Right when we first launched immersive audio onto the market, I was surprised at the flexible production tools that New Audio Technology came out with.”

“The binaural processing power of the Spatial Sound Card and its ability to produce such natural-sounding audio surprises me every time.”

“Spatial and interactive audio is an essential element in an immersive storytelling venue – often even more important than the visuals. We love the creative freedom offered by NAT applications when we choreograph scenes for our dome theater!”

“Doing immersive audio production for cinematic applications just wasn’t as easy on my audio workstation as with the Spatial Audio Designer Plug-in.”

“We’re so glad to have collaborated with New Audio Technology on the Spatial Audio Designer plug-in, a flexible tool to author and produce immersive and interactive sound with MPEG-H Audio in every DAW!”

“Producing immersive audio for domes is always challenging, so I was happy to find a flexible tool like the Spatial Audio Designer to manage every stage of production quickly and efficiently.”

“We’re very excited to be able to make our studios available virtually through NAT’s audio applications so that we can extend the reach of our audio services.”

“The Spatial Audio Designer Processor has proven to be a solid solution for our spatial audio system, making it easy to manage our everyday standard and immersive audio formats easily – including real-time setups.”

Director of the Bochum Planetarium

“In our theme park’s new fulldome, we feature all kinds of different shows and audio formats, so we’re glad to have the Spatial Audio Designer Processor to support all our needs so well and effectively.”

We use cookies on our website to give you the most relevant experience by remembering your preferences and repeat visits. By clicking “Accept All”, you consent to the use of ALL the cookies. However, you may visit "Cookie Settings" to provide a controlled consent.
Cookie SettingsAccept All
Manage consent

This website uses cookies to improve your experience while you navigate through the website. Out of these, the cookies that are categorized as necessary are stored on your browser as they are essential for the working of basic functionalities of the website. We also use third-party cookies that help us analyze and understand how you use this website. These cookies will be stored in your browser only with your consent. You also have the option to opt-out of these cookies. But opting out of some of these cookies may affect your browsing experience.
Necessary Always Enabled
Necessary cookies are absolutely essential for the website to function properly. These cookies ensure basic functionalities and security features of the website, anonymously.
Functional
Functional cookies help to perform certain functionalities like sharing the content of the website on social media platforms, collect feedbacks, and other third-party features.
Performance
Performance cookies are used to understand and analyze the key performance indexes of the website which helps in delivering a better user experience for the visitors.
Analytics
Analytical cookies are used to understand how visitors interact with the website. These cookies help provide information on metrics the number of visitors, bounce rate, traffic source, etc.
Advertisement
Advertisement cookies are used to provide visitors with relevant ads and marketing campaigns. These cookies track visitors across websites and collect information to provide customized ads.
Others
Other uncategorized cookies are those that are being analyzed and have not been classified into a category as yet.
SAVE & ACCEPT